The Spy Who Was A Slave…And Helped America 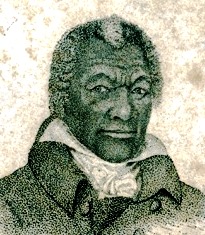 In 1781, the commander of allied French forces, General Marquis de Lafayette had a serious problem.  Benedict Arnold, the turncoat who had joined British General Cornwallis, was wreaking havoc on American interests in Virginia, threatening the revolution.  Lafayette found the solution in the capable work done by James Armistead.

Born into slavery in the mid-1700’s, Armistead sought and was granted permission to join the American Revolution as a spy.  Under the command of General Lafayette, who was avowedly anti-slavery,  Armistead was assigned to gather intelligence on enemy plans. Posing as a runaway slave, Armistead was able to infiltrate both Benedict Arnold’s and British general Cornwallis’ headquarters and insinuate himself into their trust by acting as a guide. Acting as a double agent, Armistead fed the British inaccurate information, and was able to gather information about their plans.

One day, Armistead overheard plans being made by the British naval fleet to move 10,000 troops to set up a post in Yorktown, Virginia. He relayed the information to Lafayette, who, along with George Washington, concentrated forces on Yorktown and set up a blockade. The Battle of Yorktown was the last major action of the Revolutionary War. The action crippled the British military, and on October 19, 1781, Cornwallis surrendered, effectively ending the war, and leading to the Treaty of Paris less than a year later.

Armistead eventually petitioned for, and, with the help of Lafayette, was granted his freedom in 1787, 6 years after having been instrumental in securing American independence.