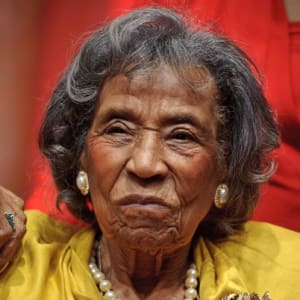 The image of a woman left for dead by state police on the Edmund Pettus Bridge in Montgomery, Alabama was one of many that galvanized public support for the 1965 Voting Rights Act. But who was this woman marching with John Lewis, Hosea Williams and Rosa Parks on Bloody Sunday?

Born Amelia Isadora Platts in 1911, she was the niece of Robert Smalls.  She graduated from the Tuskegee Institute, and knew George Washington Carver. In 1934 she registered to vote in Selma, Alabama. This was extremely difficult for Blacks to do, because of disenfranchisement legislation enacted by former confederate states in the early 20th century to thwart the 15th Amendment, which sought to protect suffrage for freedmen.  By 1965, only 300 of Selma’s African American residents were registered to vote. 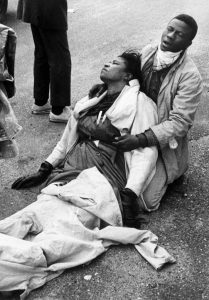 On the bridge to Montgomery, Alabama

She married her co-worker, Samuel Boynton, in 1936. The couple worked tirelessly to achieve property, voting and education rights for poor African Americans in Alabama’s farm country. She co-founded the Dallas County Voter’s League in 1933, and held voting drives for African Americans throughout the 30’s, 40’s and 50’s. By 1964, the Civil Rights Movement was gaining strength, and Amelia ran for a seat in Congress, earning 10 percent of the vote.  That same year, she asked Martin Luther King Jr. to come to Selma and help promote the cause of voting rights.  It was then that they began planning for a march from Selma to Montgomery.

On March 7, 1965, Robinson (at that time known as Amelia Boynton) was part of the march she and others had organized to protest segregation and disenfranchisement. Their goal was to cross the Edmund Pettus Bridge (named after a confederate general and grand dragon of the ku klux klan) and march to the state capital of Montgomery. Boynton was beaten unconscious by state police. Here is how she described the experience in a 2014 interview: