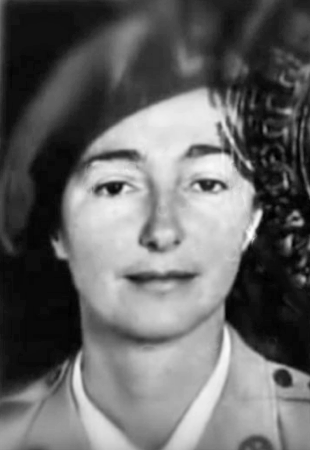 Maria Krystyna Janina Skarbek, also known as Christine Granville, was a Polish agent of the British Special Operations Executive (SOE) during the Second World War. She became a British agent even before formation of the SOE, and was its first, and longest-serving, female agent.
Her most famous exploit was securing the release of captured SOE agents who were scheduled to be executed, by brazenly meeting with the Gestapo commander of the prison, informing him that she was a British agent. She threatened him, lied to him, and bribed him with 2 million Francs. He released the prisoners.

To understand how Skarbek was able to pull off something like this, you have to know that she did not grow up in anything approaching a normal, mundane life. Born into a family of Polish nobles, she was at first brought up in the aristocratic tradition of riding, shooting, skiing and glamour. Her Catholic father caused a scandal by marrying a Jewish heiress to a banking fortune. Eventually, the family’s fortunes changed during the depression, and they were forced to live modestly. Skarbek was not discouraged, however. Unescorted, she frequented nightclubs, and even entered one of Poland’s first beauty contests. She was traveling out of the country with her second husband when the nazis invaded. She immediately offered her services to British Intelligence. Her strength was in her boldness. Rather than try to hide, she flaunted. Stopped by a German border patrol while she was carrying a silk map of the area, she rolled it up into a scarf and cheerily greeted the soldiers. Another time, when she was stopped by a German patrol on the Italian border, she raised her hands, revealing grenades she had hidden under each arm, and threatened to pull the pins. The soldiers fled.

In 1941, she was arrested and interrogated by the Gestapo, in Hungary. During the questioning, she bit her tongue hard enough to cause it to bleed, and began coughing. She convinced the Hungarian doctor that she had tuberculosis. They released her, and she was smuggled out of Hungary in the trunk of a Chrysler belonging to the British ambassador, who remarked that Skarbek was “the bravest person I ever knew. She could do anything with dynamite—except eat it.” Spymaster Vera Atkins of the SOE described Skarbek as “very brave, very attractive, but a loner and a law unto herself.”

Skarbek was a female James Bond in every sense of the character. She loved men, even dated Ian Fleming, who told a friend that she “literally shines with all the qualities and splendours of a fictitious character.” Fleming based his character, Vesper Lynd, the “Bond Girl” in Casino Royale, on Skarbek.

Skarbek was awarded the George Medal, and made an officer of the Order of the British Empire (an honor only given to men). France awarded her the Croix de Guerre. Winston Churchill called her “My favorite spy.”