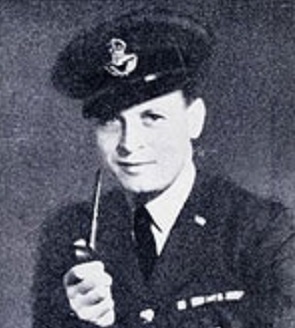 Forest Frederick Edward “Tommy” Yeo-Thomas was born in London, but moved with his family to France when he was very young. By 1914, at the outbreak of WWI, the family lived in Paris. At the age of 16, and unable to join either the British or French Army because of his age, he lied about his age to the Americans and joined the US Army. He fought with the Polish Army against the Soviets in 1920 and was captured, but escaped prison and execution by strangling a Soviet guard.

Returning to Paris, Tommy settled into family life, marrying in 1925 and working first in banking, then as general manager of a Paris fashion house. But his quiet life was to only be temporary.

When war broke out in 1939, Tommy joined the RAF, applying to be an air gunner. Considered by the RAF to be too old for the job, he was instead designated as a low-ranking interpreter in the Intelligence Branch. He left France in June, 1940, ahead of the rapidly-advancing German Army, and was soon commissioned as Pilot Officer. By 1942, he was posted to the Special Operations Executive, where his life became much more interesting.

Early in 1943, Tommy parachuted into occupied France, where he joined the Gaullists in setting up a central Resistance headquarters. Returning to England, he was able to gain a meeting with Winston Churchill, whom he convinced that the French Resistance would make an effective fifth column, and should be supported with arms and equipment. He returned to France to supervise the operation, but was betrayed and captured by the Gestapo.

The Germans tortured Tommy, hanging him upside down in ice water to the point that he required artificial respiration several times to be kept alive. He was eventually transferred to Buchenwald, from which he actually escaped, only to be recaptured and sent to a POW camp, Stalag XX-B.
After the war, Tommy was an important witness at the Nuremberg War Trials, where he was a key prosecution witness.

His nickname, “White Rabbit”, was given to him by the Gestapo, who named numerous spies after animals; for example, “White Mouse” for Nancy Wake. And yes, he was one of Ian Fleming’s inspirations for James Bond. In a scene that could have been in “From Russia With Love”, he found himself on a train filled with SS agents, and was seated at lunch with none other than Klaus Barbie. The torture scenes in “Casino Royale” are straight out of his experience at the hands of the Gestapo. An office memo found in a declassified file at the London National Archives reports the return of agent Yeo-Thomas after his imprisonment and is signed by Commander Ian Fleming of Naval Intelligence.