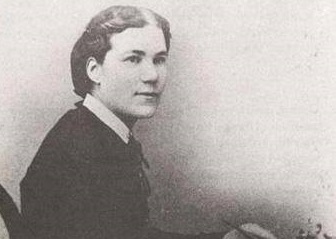 A military field nurse, a Bible salesman, a black man named Cuff, an Irish soap peddler–these were just a few of the disguises adopted by Emma Edmonds, who fled an abusive father at age 15. Her father had wanted a son and resented her for not being a boy to help him on the farm. When at last he tried to marry her off, she left home and, fearing her father would find her, emigrated from Canada to America in 1857.

Edmonds decided that she would have better luck finding work, and remaining anonymous, by becoming a man. So she became Franklin Thompson, a traveling Bible salesman in Hartford, Connecticut.

When the Civil War broke out in 1861, Edmonds/Thompson became Franklin “Flint” Thompson and enlisted in the Union Army. She joined the 2nd Michigan Infantry as a male field nurse. She participated in several battles, including the Second Battles of Manassas and Antietam, where she dealt with mass casualties in one of the bloodiest battles of the Civil War.

In 1862, she was assigned to be a mail carrier for the regiment, and was shipped to Virginia where she took part in the Siege of Yorktown.
In her memoirs, Edmonds tells of numerous exploits behind enemy lines as a spy variously disguised as an Irish peddler selling apples and soap, a Southern sympathizer named Charles Mayberry, and a black man named Cuff. She dyed her skin with silver nitrate and wore a wig for the Cuff disguise!
As Cuff, she learned important information such as that the Confederate Army was building what were known as “Quaker Guns,” or cannons that looked real from a distance, but in reality were just wooden logs. This she shared with the Union Army.

In the spring of 1863, Edmonds contracted malaria. She didn’t want to seek medical attention from the Army, so she left. Franklin Thompson was charged as a deserter, and disappeared forever! But Edmonds, no longer in disguise, worked with the United States Christian Commission as a female nurse until the end of the war.

In 1864 Edmonds published her memoirs, Nurse and Spy in the Union Army. She donated the profits from her book to various soldiers’ aid groups. She eventually married and had three children. In 1876, she attended a reunion of the 2nd Michigan and was warmly received by her comrades, who aided her in having the charge of desertion removed from her military records and supported her application for a military pension. After an eight year battle and an Act of Congress, “Franklin Thompson” was cleared of desertion charges and awarded a pension in 1884.

In 1897, Edmonds was admitted into the Grand Army of the Republic, the only woman member. One year later, on September 5, 1898, Edmonds died at her home in La Porte, Texas. In 1901, she was re-buried with military honors at Washington Cemetery in Houston