A Nurse Goes To War 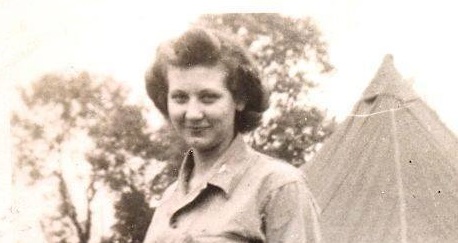 Wanting to do her part to help with the war effort, Joy Lillie, a confident twenty two year old from Grand Rapids, Michigan, joined the US Army Nurse Corp as the Second World War raged on in Europe. She had just married her high school sweetheart, who was serving stateside, and was not very happy about his new wife going overseas.

Little did Joy know that she would be deployed on the front lines of every major Allied campaign in the war. She was there on D-Day, climbing the bluffs at Normandy Beach, searching for wounded soldiers. Never more than three miles from the front, she also served in Northern France, the Battle of the Bulge, Central Europe, and Rhineland.

During D-Day, Joy stayed awake for 72 hours straight to save as many soldiers as possible. For this she was awarded the Bronze Star, a medal given for heroic and praiseworthy service in a combat zone. Lillie also received the American Campaign, European-African-Middle Eastern Campaign and WWII Victory Medals, the Normandy Medal, and the Honorable Service Lapel Button WWII.

Lillie retired from service with the rank of First Lieutenant. She and her husband made their home on a small farm near Grand Rapids, Michigan, and raised ten children. After 17 years, she returned to nursing, working as a car3egiver for 20 more years. She lived to be 91.