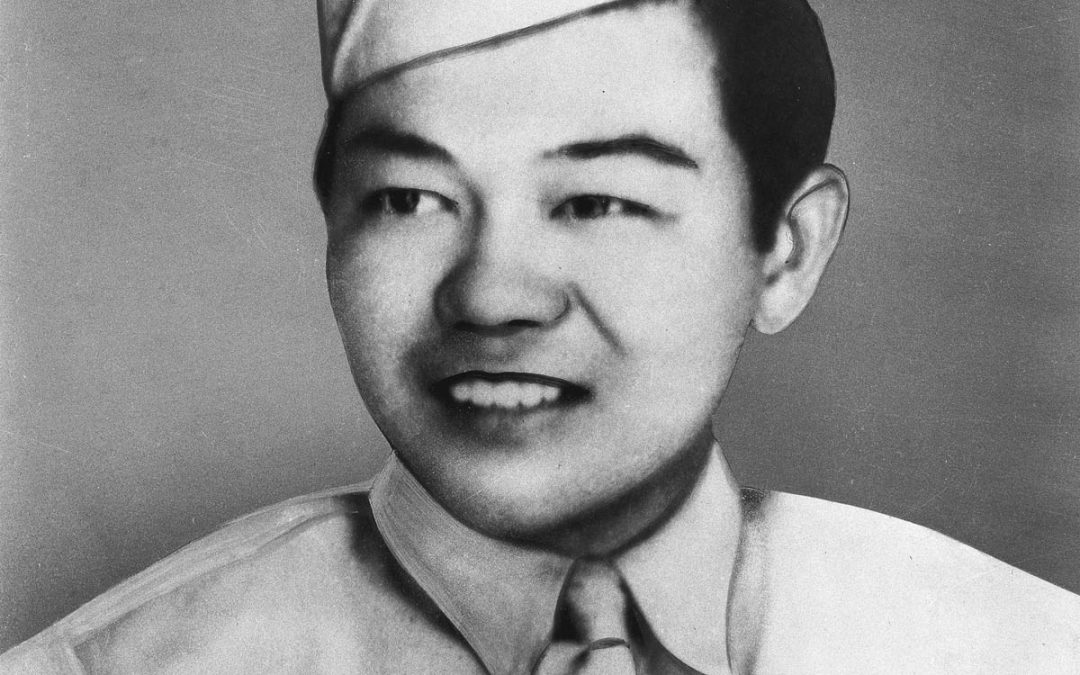 Sadao Munemori was born in California to Japanese immigrant parents. He grew up in Glendale where as a kid he was called Spud because he preferred potatoes to rice, and where he fell in love with swimming.
After high school he worked as a mechanic. One month before Pearl Harbor, he enlisted in the army. “I think I did right by enlisting because my home is here in the US,” he wrote his sister. But after Pearl Harbor he and fellow Japanese Americans were demoted and relegated to menial labor. At the same time, his family was sent to the Manzanar internment camp in central California.
When Japanese American soldiers were allowed to reenter active service in 1943, Sadao joined the 442nd Regimental Combat Team, a segregated unit made up of American born, Japanese men. This unit would engage in combat in France and Italy. He participated in the rescue of the Lost Battalion, 275 soldiers who were trapped by the Germans. The 442nd is the most decorated unit in U.S. military history for its size and length of service . In Italy Munemori lost his life during the Battle of Rimini when he dove on an enemy grenade to save the lives of two fellow soldiers. He was 22 years old.
Sadao received the Medal of Honor for his actions. The citation reads, in part: “He fought with great gallantry and intrepidity near Seravezza, Italy. When his unit was pinned down by grazing fire from the enemy’s strong mountain defense and command of the squad devolved on him with the wounding of its regular leader, he made frontal, one-man attacks through direct fire and knocked out two machine guns with grenades. Withdrawing under murderous fire and showers of grenades from other enemy emplacements, he had nearly reached a shell crater occupied by two of his men when an unexploded grenade bounced on his helmet and rolled toward his helpless comrades. He arose into the withering fire, dived for the missile and smothered its blast with his body. By his swift, supremely heroic action Pfc. Munemori saved two of his men at the cost of his own life and did much to clear the path for his company’s victorious advance”