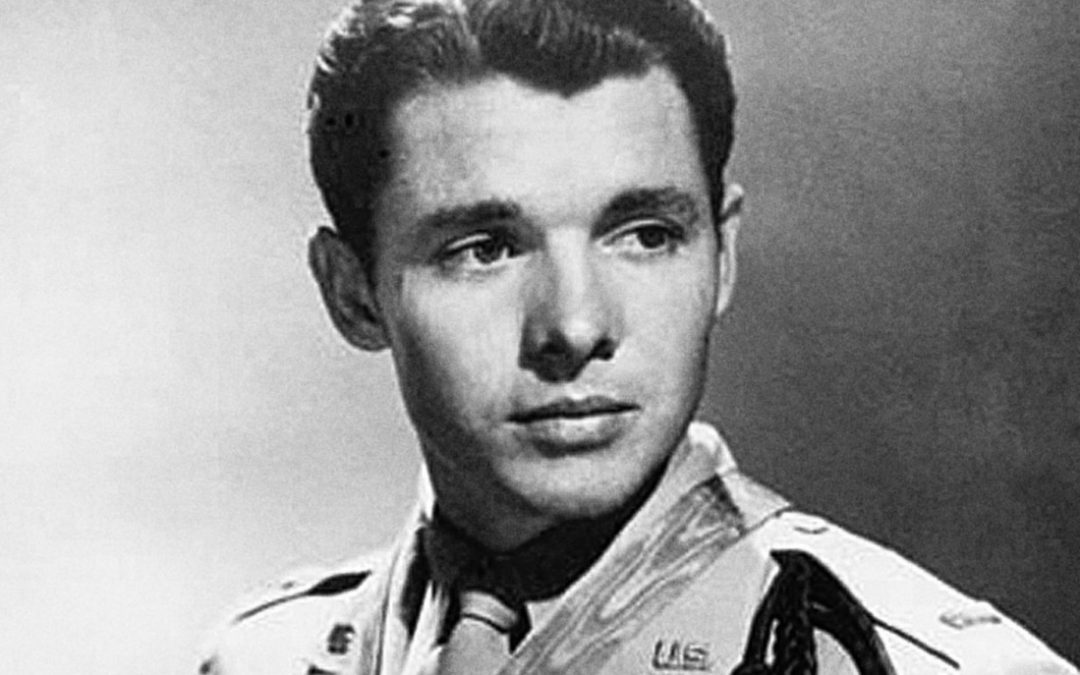 A generation ago, everyone knew of Audie Murphy–the war hero turned movie star.  One of the most decorated American combat soldiers of WWII, Murphy received every military combat award available from the U.S. Army.

Born into a large family of poor sharecroppers in Hunt county, Texas, Murphy was one of 11 children. When his father deserted the family, Murphy left school at the age of 10 to help raise his brothers and sisters. When his mother died 6 years later, the family was split apart; the children were sent to live in orphanages or with other family members.

After the Pearl Harbor attack, Murphy, only 17, falsified his birth certificate so that he could join the military.  Initially he was turned down by the Marines, Army and Navy for being underweight, but he was eventually able to join the Army. Murphy proved himself an excellent marksman and highly skilled soldier.  First at Salerno as part of the Voltuno River campaign, and then at Anzio to be part of the Allied force that fought its way to Rome, Murphy quickly advanced through the ranks.

In August of 1944 Lt. Murphy was part of Operation Anvil-Dragoon, the invasion of Southern France.  His division suffered over 4500 casualties in the seven week campaign. For his valor, Murphy became one of the most decorated soldiers in his company.  But his biggest challenge was yet to come.

In January 1945, near the village of Holtzwihr in eastern France, Murphy’s forward unit came under heavy fire from the advancing Germans, including six Panzer tanks and over 250 infantry. Murphy ordered his men to fall back and regroup. Meanwhile, he mounted a burning M-10 tank destroyer that had been abandoned in the retreat and fired its .50 caliber machine gun at the advancing Germans, while also directing artillery fire.  He held off the German advance for nearly an hour, killing or wounding 50 Germans while his men regrouped. Murphy was shot in the leg, but insisted on staying with his men while they repelled the Germans.

After the war, Murphy was assigned to Ft. Sam Houston in Texas. During a 30 day leave, he traveled throughout the U.S. and was feted with parades, banquets and speeches. But the war had taken its toll: he was plagued by bouts of depression and insomnia, and slept with a loaded pistol under his pillow.

Murphy’s acting career began in 1948, when James Cagney saw his photo on the cover of Life Magazine.  Murphy worked briefly with Cagney and his brother and received training in acting and voice, which he continued after his work with the Cagneys.  In 1949 Murphy wrote the book, To Hell and Back, which was adapted for the 1955 movie in which he starred. The movie was a box office success for Universal Studios, surpassed only by Jaws in 1975!  Murphy starred in many other roles, including numerous Westerns and television appearances.  His greatest performance is generally thought to be as Private Henry Fleming in The Red Badge of Courage.

Well aware of the devastating effects of PTSD, then known as “battle fatigue” or “shell shock”, Murphy campaigned for recognition of the problem and spoke candidly of his own struggle. He urged Congress to provide for study of the problem and to extend health care benefits to veterans.  Shortly after his death in 1971, Texas congressman Olin Teague introduced legislation to build the Audie Murphy V.A. Hospital in San Antonio. the facility was dedicated in 1973.

The first quarter of the 21st century is nearly past; fewer and fewer members of “The Greatest Generation” who lived through a depression and fought in WWII survive. As a Nation we would do well to remember those who eschewed personal comfort and safety and fought and labored to preserve freedom and build a better world for succeeding generations.