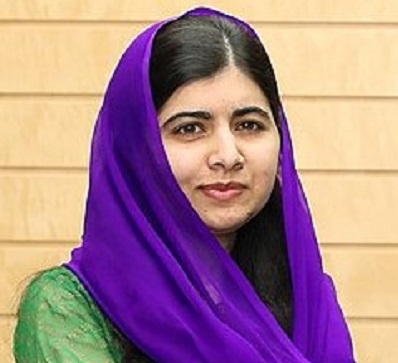 The daughter of a teacher who ran a girl’s school in a village in Pakistan, Malala Yousafzai loved going to school. But by January 2008, when she was only 11 years old, the Taliban had become a powerful force in the region. They issued an edict forbidding girls from attending school, and proceeded to blow up more than 100 girls’ schools. Late in 2008 a BBC correspondent, Aamer Ahmed Khan, sought a schoolgirl to write a blog about conditions in the region. It would be a dangerous thing to do, and the only girl who volunteered was Malala.

By this time, militants were taking over, banning music, television, and women from shopping. They were beheading policemen, looting relief goods intended for displaced persons, searching vehicles. In this milieu, Yousafzai wrote her blog. She continued to write until early 2009.

The terrorists thought they would change my aims and stop my ambitions, but nothing changed in my life except this: weakness, fear and hopelessness died. Strength, power and courage was born

Yousafzai’s public recognition infuriated the Taliban. Death threats were published and notes slipped under her door. In October, 2012, Yousafzai was riding the bus home when a gunman boarded and demanded that she identify herself, or he would kill everyone on the bus. Yousafzai had the courage to do so, and the gunman shot her in the head.

Miraculously, Yousafzai survived. After months of surgeries and physical rehabilitation she was able to continue advocating for human rights. The attempt on her life brought her further recognition. On her 18th birthday, she opened a school in the Bekaa Valley, Lebanon, near the Syrian border, for Syrian refugees. She had an audience with Queen Elizabeth II in Buckingham Palace, met with Barack Obama, received standing ovations at the U.N.

Yousafzai was co-recipient of the 2014 Nobel Peace Prize for her struggle against the suppression of children and young people and for the right of all children to education. She continues to receive accolades for her work; just this year Fort Bend County, Texas dedicated the Malala Yousafzai Elementary School.