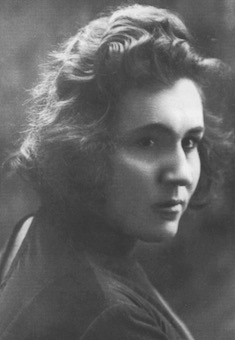 “Marry a serviceman, and you serve in the army: an officer’s wife is not only a proud woman, but also a responsible title.” These words were spoken by Mariya Vasilyevna Oktyabrskaya, the Russian wife of an officer in the Soviet Army during WWII. But when she learned that her husband, Ilya,  had been killed fighting the Germans, she took that responsibility up a notch.

Determined to avenge her husband’s death, Oktyabrskaya sold all of her belongings in order to buy a T-34 medium tank, which she learned to handle expertly. She had learned military skills from her husband–how to shoot, throw grenades, drive–their dates would have been quite out of the ordinary!

On her first outing she killed around 30 Germans, and when artillery fire immobilized her tank, which she had named “The Fighting Girlfriend”, she got out in the middle of the firefight, repaired the tank, and returned to her task of eliminating Germans.

Oktyabrskaya engaged the enemy again a month later, as part of the Leningrad–Novgorod Offensive. She proceeded to tear through the German defenses, destroying machine gun nests and a self-propelled gun. But that was her last battle. Attempting once again to repair her tank, she was hit by mortar fragments.

Oktyabrskaya was posthumously awarded The Soviet Union’s highest military honor, the Hero of the Soviet Union.  This is the letter she wrote to Stalin, requesting permission to purchase the tank and join the battle:

“My husband was killed in action defending the motherland. I want revenge on the fascist dogs for his death and for the death of Soviet people tortured by the fascist barbarians. For this purpose I’ve deposited all my personal savings – 50,000 rubles – to the National Bank in order to build a tank. I kindly ask to name the tank ‘Fighting Girlfriend’ and to send me to the frontline as a driver of said tank.”