Don’t Let Them See You Cry 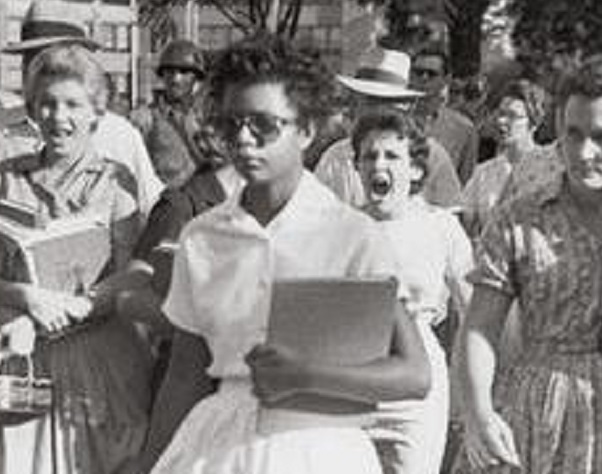 Things didn’t go as planned that September morning in 1957. Nine black students would walk together to all-white Central High School in Little Rock, Arkansas in order to integrate the school. Wearing bobby socks and a white skirt she had sewn for the occasion, 15 year old Elizabeth Eckford was unaware that plans had changed.  She found herself alone, surrounded by an angry mob as she tried to enter the school. The all-white mob included men, women, and students chanting “Two, four, six, eight, we ain’t gonna integrate.” She even found herself facing off against National Guard troops! Here is how she described her experience:

“When I was able to steady my knees, I walked up to the guard who had let the white students in. He didn’t move. When I tried to squeeze past him, he raised his bayonet, and then the other guards moved in and they raised their bayonets. They glared at me with a mean look and I was very frightened and didn’t know what to do. I turned around and the crowd came toward me. They moved closer and closer. Somebody started yelling, ‘Drag her over this tree! Let’s take care of that n…'”

The chants grew louder; Elizabeth turned to an elderly white woman nearby for help, but the woman spat on her. Elizabeth was forced to flee through a mob of nearly 250 people, where she managed to find a bench at a bus stop. She sat there, surrounded by the mob, waiting for the city bus to take her home. News reporters formed an informal protective line around her; one reporter, Benjamin Fine, sat down next to her. “Don’t let them see you cry.” he told her.

The photo of Elizabeth being harassed by the crowd had a profound effect, raising public awareness of the prejudice black people endured daily. The Little Rock Nine eventually entered Central High School, escorted by Army troops ordered to Arkansas by President Eisenhower. White students objected, voicing some of the same ignorant phrases we hear to this day: “Whites should have rights, too!” declared Hazel Bryan, the girl seen in the photograph, shouting at Elizabeth.  Interestingly, years later Hazel apologized to Elizabeth, and the two actually became friends for a time. But the experience at Little Rock Central High: the daily harrassment, physical abuse, and cold indifference of those who should have protected a vulnerable young girl took their toll. For much of her life, Elizabeth has struggled with what we now call PTSD.

Elizabeth has been hailed as a pioneer for civil rights. She has met presidents, been awarded medals, appeared on television with Oprah. She still lives in Little Rock, in the same house where she grew up, living a fairly quiet life that is often typical of involuntary heroes.