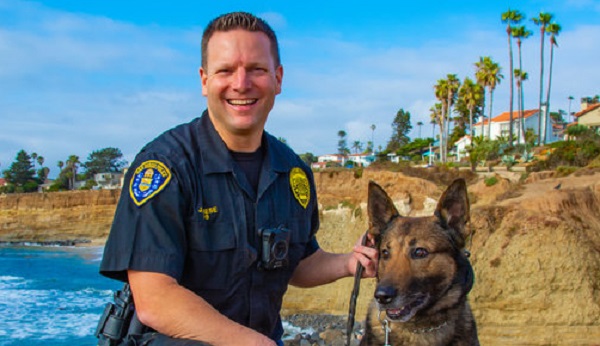 San Diego police officer Jonathan Wiese, a Marine and 20 year veteran of the police force, is scared of heights.  But that didn’t stop him from tying one end of a 100 foot K-9 leash around his waist, handing the other end to his buddies, and rappelling down a 30 foot cliff to the sea early in the morning of June 13, 2020!  “…I pretty much threw the end of the leash to them and then I said, ‘hang on, I’m going,’ and I just jumped off.”

A few minutes earlier a distraught man had driven his pickup off the cliff, into the sea, with his two little girls on his lap. “My dad instincts kicked in,” Wiese said. Wiese has two little kids of his own. “I would do for the public, what I would do for them,” he said. “I treat everyone that way. I treat them as if they were my family down there, and that’s pretty much what happened in this case.”

Wiese was lowered on to the rocks below. The man was out of the truck, treading water, with a girl under each arm. One was crying, the other appeared to be lifeless. Remembering his Marine Corps water survival skills, Wiess swam under the three and pushed them to shore, keeping them above water.  At the bottom of the cliff, he put one little girl in a canvas bag, and his buddies hauled her up to safety.  By that time, San Diego firefighters had arrived to assist with the rescue of the second little girl. Wiess stayed with the man, who was badly injured.  All three survived.

The incident was not Wiess’ first act of bravery.  In 2019 he chased down and arrested a suspect in a shooting at Poway Chabad that left three people dead.  “I didn’t do the job to be liked every day, I didn’t do it to become rich. I did it because I want to be out there making a difference and helping people, as cliché as that might sound, but I was just glad I could be there,” Wiese told Interviewers. “You just do what you have to do, but after everyone was safe, it hits you and you just want to go home and hug your kids, that’s for sure.”

Weiss was awarded Officer of the Year in 2019, and a grateful community declared August 6 Jonathan Wiese Day.