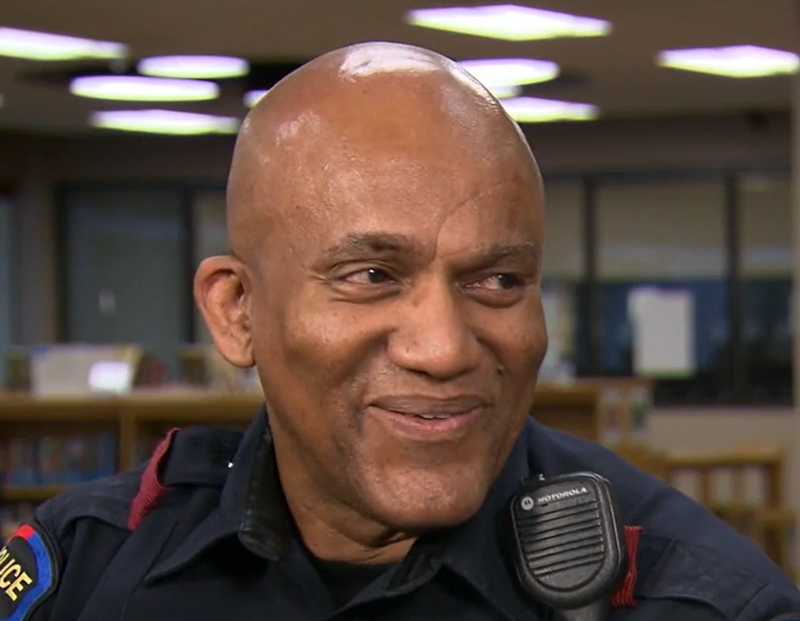 He memorized over 20,000 names of students during his career as school resource officer in Plano, Texas. He made balloon animals for kids, played the harmonica, rapped about the dangers of drugs, and danced joyously in front of the high school as he directed traffic during the morning commute.  Officer Art Parker, or “OP” as he is affectionately known by the students and community he served for 34 years, retired last year.

Growing up, Parker knew he wanted to be a police officer. He joined the Army’s 95th Military Police Battalion, serving in Germany. While stationed there, he won the “Super Soldier” competition and was nicknamed “Officer Friendly” by his superiors. He worked with German police to help handicapped and special needs kids, and he started a program with other soldiers to mentor at-risk kids.  After military duty he came to Plano and worked for 5 years as a patrol officer before becoming a school resource officer.

Officer Parker was not only a “feel good” cop. He insisted that kids know and follow the rules.  He had zero tolerance for kids smoking. Each friday he spent $150 of his own money for snacks for kids. But if there had been a fight that week, there would be no snacks.  School fights decreased significantly. He did not play favorites. He told an interviewer, “Once you let somebody off the hook after busting other people, your credibility is gone, so I stayed consistent.”

Officer Parker is aware of the power he and other officers have to affect people’s lives, just by their example.  When a teacher thanked him for being a role model for black kids, he responded, “It’s not just the young black men. It’s the young white men, white women, Asians, because they may have preconceptions of who I am,” he said. “Them knowing me is important. It’s important as a role model that I don’t concentrate on black [students] only.”

Luckily Parker will not be going away entirely. He still plans to volunteer at schools and have a presence in the city. There will also still be his famous balloon animals.