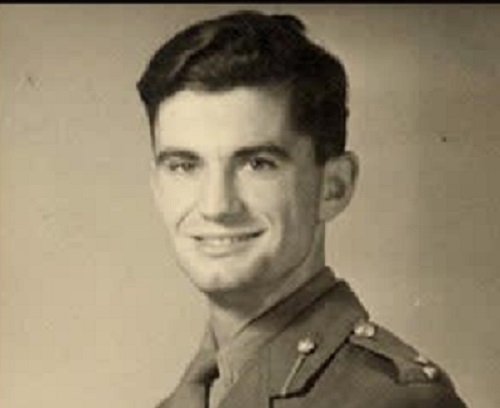 Peter Masters was one of many teenage refugees  from Austria who came to Britain in the 1930’s on the Kindertransport, fleeing persecution because they were Jewish. By 1942, as the shadow of the nazis fell across Europe, he knew he would return to fight them. When asked by a recruiter why he wanted to join the British Army at age 18, he replied, “I think part of this war belongs to me, sir.”

Masters signed up for hazardous duty, and was assigned to Churchill’s secret X-Troop.  Many of the members of that elite group were, like him, Austrian or German Jewish refugees who spoke fluent German.  They were trained as commandos–how to use weapons and explosives, interrogate prisoners, and kill with their bare hands if necessary.  The unit was  the most highly trained group in the British Army. They were so valuable that they were not deployed as a single unit, but dispersed among many regular fighting units. And, because they were Jewish, they were given new identities, so that if they were captured they could not be traced to relatives still living in Germany or Austria.  (Masters’ real last name was Arany) Much information about the unit remains classified to this day.

Masters would be assigned to the Bicycle Troop. Equipped with a heavy pack of explosives, ammunition, a machine gun and a bicycle, he and his group landed at Normandy Beach on D-
Day. He waded ashore in horrific conditions. The sea was already red with the blood of the dead and wounded.  He and his group headed inland to meet up with glider troops to secure a strategic bridge.

At the end of the war, X Troop was officially disbanded. but many of its members remained in Europe, hunting and bringing to justice nazi war criminals, translating captured documents, and tracking and eliminating nazi resistance groups.

Striking Back: A Jewish Commando’s War Against the Nazis, by Peter Masters.