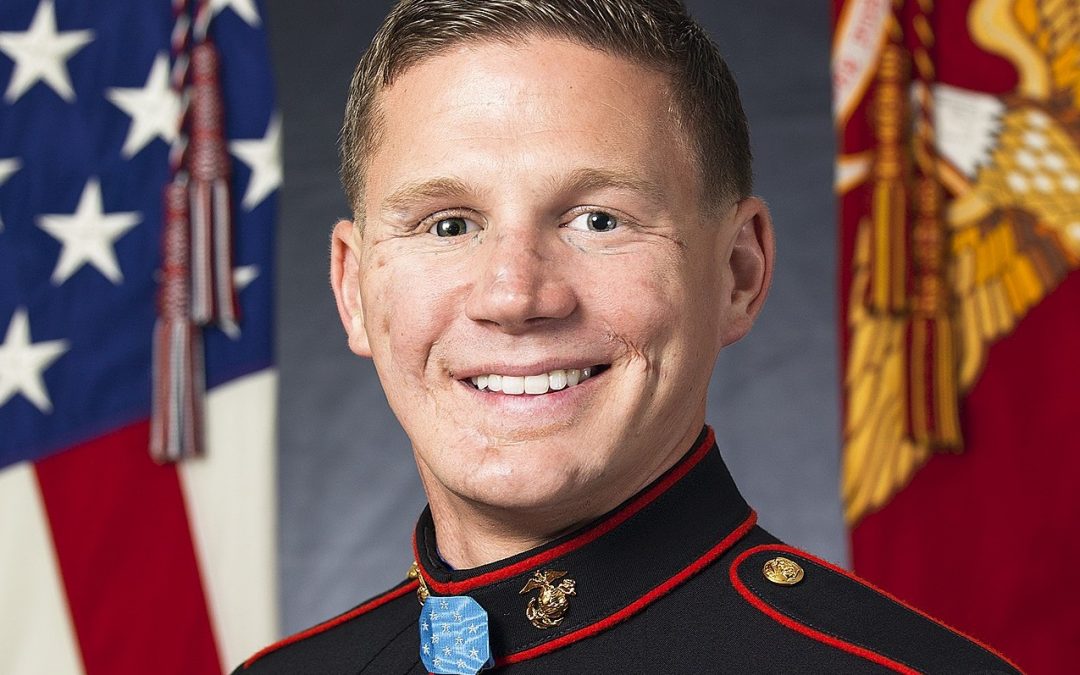 Lying on a dusty rooftop in the village of Marjah, Helmand Province, Afghanistan, Kyle Carpenter was losing consciousness, having just thrown himself on a Taliban grenade in order to shield his fellow Marine. His last thoughts were of his family in South Carolina. He had just turned 20.

Carpenter’s platoon was attacked while setting up a new outpost in the region. Reinforcing the position with sandbags while keeping  low to avoid being hit by enemy gunfire, they could hear the rounds hitting the sandbags. Carpenter and his fellow Marine, Nick Eufrazio were manning a security post when a grenade came over the sandbag barrier and landed next to them. Carpenter instinctively moved toward the grenade to protect his buddy. “They initiated an attack with two grenades, and then the third one hit me and Nick,” Carpenter recounted. “I didn’t even know until the beginning or middle of February what the story was, and what my guys saw that day. I didn’t even know that because of how traumatic my injuries were and how much I didn’t remember. It’s frustrating, and I’ve thought about it for hours on end.”

Marines who rushed to the scene found both their bodies. Smoke was still coming off their bodies. Carpenter was badly injured, barely alive. His jaw was mangled and he had massive trauma to his right arm, neck injuries and a collapsed lung. “Everything went white,” he said. “I could feel that my eyes were open, but I couldn’t see anything. And there was — loud is an understatement — ringing in my ears. I kept saying, ‘I’m going to die. I’m going to die.’ And my buddies sounded like they were a mile away, even though they said they were screaming in my ears, ‘You’re not going to die!’”

Carpenter underwent dozens of surgeries to repair his broken body.  His recovery took nearly three years.  On June 19, 2014, Carpenter received the Medal of Honor in a ceremony at the White House.[12] He is the eighth living recipient to be awarded the Medal of Honor for actions in Afghanistan.  His citation reads as follows:

“The president of the United States, in the name of the congress, takes pleasure in presenting the Medal of Honor to Lance Corporal William “Kyle” Carpenter, United States Marine Corps, For conspicuous gallantry and intrepidity at the risk of his life above and beyond the call of duty while serving as an Automatic Rifleman with Company F, 2d Battalion, 9th Marines, Regimental Combat Team 1, 1st Marine Division (Forward), 1 Marine Expeditionary Force (Forward), in Helmand Province, Afghanistan in support of Operation Enduring Freedom on 21 November 2010. Lance Corporal Carpenter was a member of a platoon-sized coalition force, comprised of two reinforced Marine squads partnered with an Afghan National Army squad. The platoon had established Patrol Base Dakota two days earlier in a small village in the Marjah District in order to disrupt enemy activity and provide security for the local Afghan population. Lance Corporal Carpenter and a fellow Marine were manning a rooftop security position on the perimeter of Patrol Base Dakota when the enemy initiated a daylight attack with hand grenades, one of which landed inside their sandbagged position. Without hesitation, and with complete disregard for his own safety, Lance Corporal Carpenter moved toward the grenade in an attempt to shield his fellow Marine from the deadly blast. When the grenade detonated, his body absorbed the brunt of the blast, severely wounding him, but saving the life of his fellow Marine. By his undaunted courage, bold fighting spirit, and unwavering devotion to duty in the face of almost certain death, Lance Corporal Carpenter reflected great credit upon himself and upheld the highest traditions of the Marine Corps and the United States Naval Service.”

Carpenter is devoting his life to being an inspiration to others. “I’ve been given the chance to share my story with others. It’s not the story of a hero – but the story of an ordinary man placed in an extraordinary situation. I want my story to help others see what’s extraordinary in themselves; to see how small acts of gratitude and kindness can change the world around them, and how we can all be part of something bigger than ourselves.” He says.