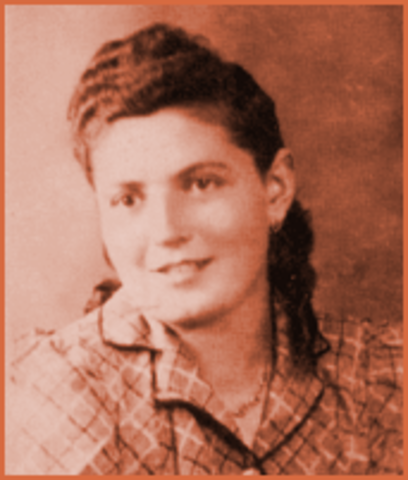 She was only 11 years old when the nazis entered her village in Eastern Poland and began rounding up Jews.  First her father, then, one by one, her brothers were murdered, leaving only Alicia and her mother. The SS eventually forced Alicia and her friends to board a train bound for the concentration camp, but her friends, hoping to save her life, threw her from the moving train. Having no money, food or help from adults, and in an unfamiliar location, she nevertheless managed to find her way home. Her freedom was short-lived; she and her mother were arrested and taken to a prison camp. The Germans began shooting prisoners. Alicia escaped execution when her mother stepped in front of her, sacrificing her own life for that of her daughter.

In spite of the hardships, terror and heartbreak she constantly faced, Alicia helped others.  She worked on a farm and was able to find food scraps to feed her mother before they were captured. She helped a mother and her young children to hide from nazi soldiers, and brought them what little food she could find, even though she herself was starving.

The end of the war brought little respite from the challenges Alicia would face. Many of her fellow Poles hated Jews, and had cooperated with the German occupation. Alicia, now 15, found an apartment and made room for as many orphans as she could. She set up a used clothing business, supplied by Jewish soldiers in the Russian army. She eventually joined the Brecha network and smuggled thousands of Jewish survivors out of Russian occupied countries.

Sailing on an illegal immigrant ship for Palestine in 1947, Alicia was caught by the British navy an put in a concentration camp for 8 months. She, along with over a thousand other children, was freed by Golda Meier and made her way to Tel Aviv, where she joined the Israeli navy.

Alicia’s story is a poignant reminder that survival in times of extreme adversity depends on one’s faith and belief in the basic goodness of people, as well as a determination to help others.  Until her death in 2017, she traveled throughout the United States, presenting seminars and working with youth groups to tell the story of how she survived and fought back, and to speak for those who did not survive.

Read Alicia: My Story  on Amazon