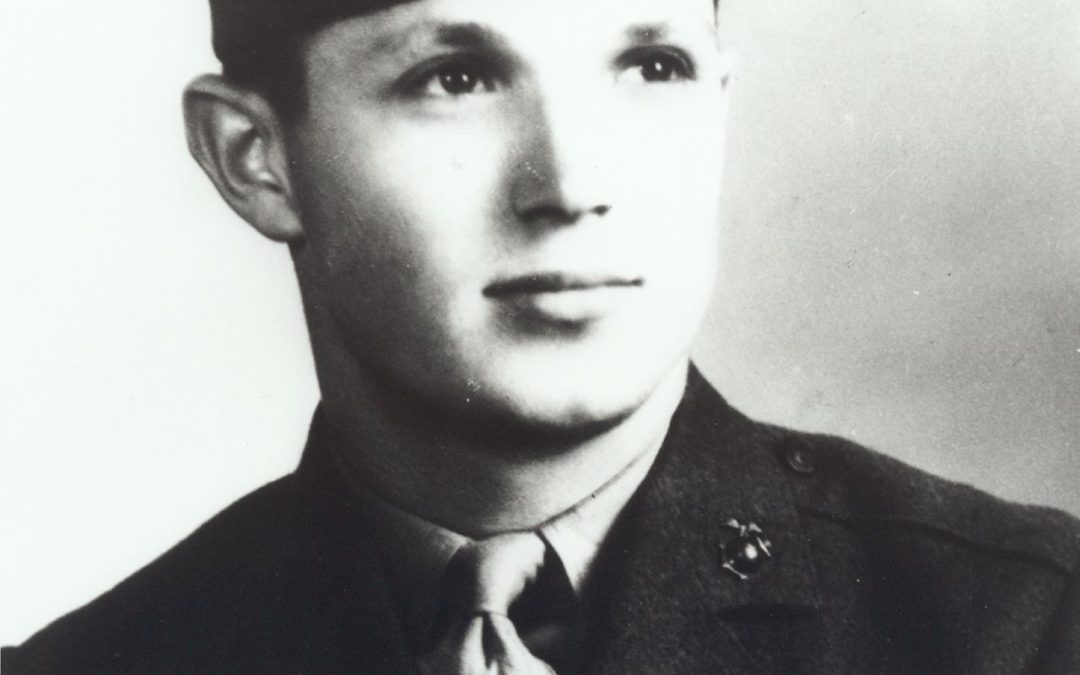 Iwo Jima, a tiny island in the Japanese archipelago, saw some of the fiercest fighting in WWII.  26,000 Japanese and American soldiers died in the month-long battle for control of the island. One of those who died was Marine Corporal Tony Stein, who was awarded the Medal of Honor for his brave actions on the first day of the battle.

Tony was the type of person who was cut out for heroism.  His parents emigrated to the U.S. to escape anti-Semitism in Eastern Europe after WWI.  An active kid, he grew bored with the classroom, and dropped out of high school to join FDR’s Civilian conservation Corps. When he was 19, he rescued a boy drowning in the river near his home in Dayton, Ohio. A scrappy fighter, standing 5’6″ and weighing 128 pounds, he won the local Golden glove boxing championship when he was 20.

Remembering why his parents had emigrated to the U.S., Tony was eager to join the war against fascism in 1942.  When he was 21 he joined the Marines, reasoning that they would be the first to be sent to battle.  He joined the ParaMarines, hoping to become a paratrooper.  But his excellent marksmanship landed him a job as a sniper. He fought at Guadalcanal, Bougainville, and Vella Lavella.  When he returned home on leave he was physically transformed: 5’8″ and 190 pounds of muscle.  When his leave was up he headed to Camp Pendleton where he helped set up the newly-formed Marines 5th Division. Promoted to the rank of corporal, he was in charge of a 13-man squad.

In February 1945 Corporal Stein, carrying a Browning .30 caliber machine gun that he had modified with a custom buttstock, sight and trigger, he and his men hit the beach on Iwo Jima. His machine gun roared above the noise of the battle; his men nicknamed it “The Stinger”.  Among the first to land, the men were pinned down on the beach by brutal fire from an enemy they could not see.  Stein boldly stood up to get a better view of the enemy positions, thereby drawing their fire while he ran toward their positions, all the while blasting away at them with The Stinger. He attacked the pillboxes one by one, returning eight time to the beach for more ammunition. He actually shed his boots and helmet so he could run faster!  On his return trips, he assisted the wounded to aid stations.  He was responsible for destroying several enemy pillboxes.

Stein was wounded in the battle to  capture Mount Suribachi, where his unit, the 28th Marines, eventually raised the flag.  Stein was evacuated to a hospital ship, but returned to battle upon hearing that his comrades were taking heavy casualties.  But his luck ran out; he was killed while leading a patrol to  reconnoiter a machine gun emplacement.

Stein was awarded the Medal of Honor with 15 recommendations.  His citation reads as follows:

“For conspicuous gallantry and intrepidity at the risk of his life above and beyond the call of duty while serving with Company A, 1st Battalion, 28th Marines, 5th Marine Division, in action against enemy Japanese forces on Iwo Jima, in the Volcano Islands, 19 February 1945. The first man of his unit to be on station after hitting the beach in the initial assault, Cpl. Stein, armed with a personally improvised aircraft-type weapon, provided rapid covering fire as the remainder of his platoon attempted to move into position. When his comrades were stalled by a concentrated machinegun and mortar barrage, he gallantly stood upright and exposed himself to the enemy’s view, thereby drawing the hostile fire to his own person and enabling him to observe the location of the furiously blazing hostile guns. Determined to neutralize the strategically placed weapons, he boldly charged the enemy pillboxes 1 by 1 and succeeded in killing 20 of the enemy during the furious single-handed assault. Cool and courageous under the merciless hail of exploding shells and bullets which fell on all sides, he continued to deliver the fire of his skillfully improvised weapon at a tremendous rate of speed which rapidly exhausted his ammunition. Undaunted, he removed his helmet and shoes to expedite his movements and ran back to the beach for additional ammunition, making a total of 8 trips under intense fire and carrying or assisting a wounded man back each time. Despite the unrelenting savagery and confusion of battle, he rendered prompt assistance to his platoon whenever the unit was in position, directing the fire of a half-track against a stubborn pillbox until he had effected the ultimate destruction of the Japanese fortification. Later in the day, although his weapon was twice shot from his hands, he personally covered the withdrawal of his platoon to the company position. Stouthearted and indomitable, Cpl. Stein, by his aggressive initiative sound judgment, and unwavering devotion to duty in the face of terrific odds, contributed materially to the fulfillment of his mission, and his outstanding valor throughout the bitter hours of conflict sustains and enhances the highest traditions of the U.S. Naval Service.