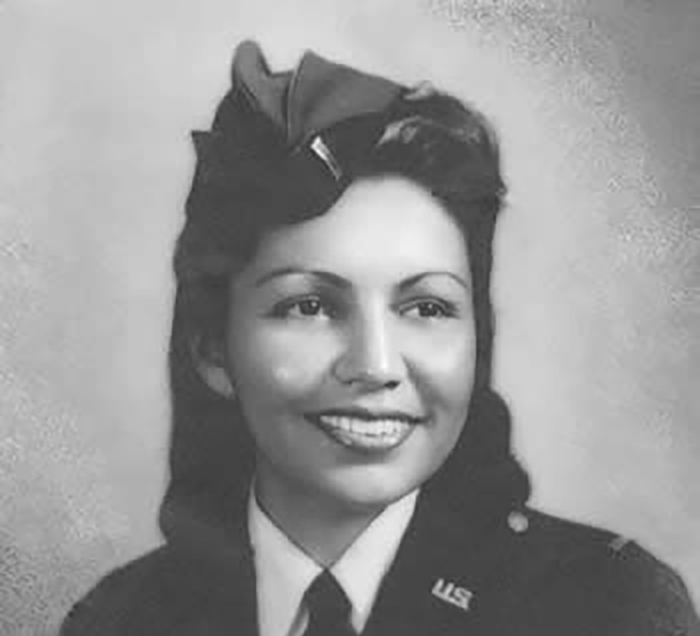 Marcella LeBeau was born on October 12, 1919, on the Cheyenne River Indian Reservation in Promise, South Dakota. She is a member of the Two Kettle Band Cheyenne River Sioux Tribe and, and is known in Lakota as Wignuke Waste Win (Pretty Rainbow Woman). Marcella, now 101 years old, has accomplished enough in her life to fill three centuries of living. But, for her, the greatest honor and privilege of her life has been serving with the United States Army as a nurse during the Second World War.
Marcella served with the 76th General Hospital Unit in England, France, and Belgium. During D-Day, Marcella landed at Utah Beach, near Carentan, where she camped in a cow pasture for several days, helping wounded service members with medical aid and waiting for her next assignment. In December 1944, Marcella arrived in Liege, Belgium, just in time for the start of the Battle of the Bulge. In Liege, Marcella worked in a thousand-bed hospital, tending to wounded Allied soldiers. Marcella’s hospital was at risk during the German advance in the Battle of the Bulge, as they headed towards the Port of Antwerp. In fact, the German advance was so close to Marcella’s hospital that the nurses were told to be packed and ready to be evacuated at a moment’s notice, although they were not told why they may have to be evacuated. During the Battle of the Bulge, Marcella found herself only a few miles away from the frontlines and experienced buzz bombs night and day. Sadly, one buzz bomb that was dropped hit her hospital in Liege and 25 men died as a result. During her time in military service, Marcella never experienced any racial discrimination. In fact, some of her colleagues who knew that her great-grandfather was a chief, assumed Marcella was an Indian princess. She left the Army as a First Lieutenant.
In 2004 at the 60th anniversary of D-Day, Marcella was awarded the French Legion Medal of Honour in France for her actions in the Army. In 2006, she was inducted into the South Dakota Hall of Fame as well as a lifetime achievement award from South Dakota State University. Most recently in 2020, Marcella was dubbed one of South Dakota’s most influential women of the century by USA Today.
At nearly 102 years young, Marcella is still advocating for the Lakota community. She is currently working to have the medals of honor revoked to those U.S. Calvary servicemen who participated in the 1890 Wounded Knee Massacre that left close to 300 Lakota men, women, and children dead. Although her greatest pride is being a nurse during the Second World War, she wants to ensure her history continues to be passed down, telling young people to “learn the true Indian history and to follow in the steps of our ancestors. ”
Photo Credit- United States Army/Cheyenne River Reservation
Text Credit- Madeline Hitz, warhistoryonline