This is the end—for me, the beginning of life 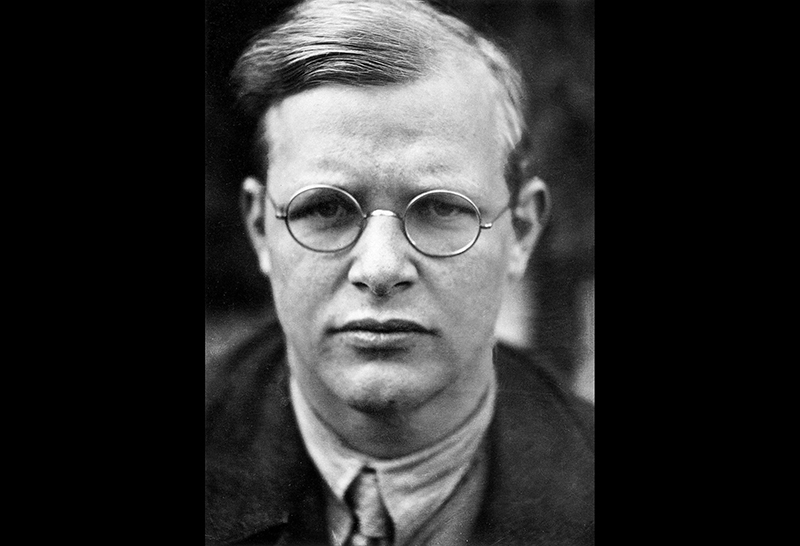 These were the last words of theologian Dietrich Bonhoeffer, the brilliant and courageous 39 year old Lutheran Pastor and opponent of Nazism.
In 1933, two days after Adolf Hitler became chancellor of Germany, Dietrich Bonhoeffer, lecturer at Berlin University, took to the radio and denounced the Nazi Fuhrerprinzip, the leadership principle that was merely a synonym for dictatorship. Bonhoeffer’s broadcast was cut off before he could finish. Shortly thereafter, he moved to London to pastor a German congregation, while also giving support to the Confessing Church movement in Germany, a declaration by Lutheran and evangelical pastors and theologians that they would not have their churches co-opted by the Nazi government for propagandistic purposes. Bonhoeffer returned to Germany in 1935 to run a seminary for the Confessing Church; the government closed it in 1937.
In February 1938, Bonhoeffer made an initial contact with members of the German Resistance when his brother-in-law Hans von Dohnányi introduced him to a group seeking Hitler’s overthrow at Abwehr, the German military intelligence service. Bonhoeffer left for the United States in June 1939 at the invitation of Union Theological Seminary in New York. Amid much inner turmoil, he soon regretted his decision and returned after two weeks, despite strong pressures from his friends to stay. He wrote of his decision:
“I have come to the conclusion that I made a mistake in coming to America. I must live through this difficult period in our national history with the people of Germany. I will have no right to participate in the reconstruction of Christian life in Germany after the war if I do not share the trials of this time with my people … Christians in Germany will have to face the terrible alternative of either willing the defeat of their nation in order that Christian civilization may survive or willing the victory of their nation and thereby destroying civilization. I know which of these alternatives I must choose but I cannot make that choice from security.”
Bonhoeffer’s continued vocal objections to Nazi policies resulted in his losing his freedom to lecture or publish. He soon joined the German resistance movement, even the plot to assassinate Hitler. In April 1943, shortly after becoming engaged to be married, Bonhoeffer was arrested by the Gestapo. Evidence implicating him in the plot to overthrow the government came to light and he was court-martialed and sentenced to die. While in prison, he acted as a counselor and pastor to prisoners of all denominations.
Bonhoeffer was sentenced to death on 8 April 1945 by SS judge Otto Thorbeck at a drumhead court-martial without witnesses, records of proceedings or a defense in Flossenbürg concentration camp. Stripped of his clothing, he was executed there by hanging at dawn on 9 April 1945, only days before the camp was liberated by American troops. Bonhoeffer’s ‘Letters and Papers from Prison’ was published posthumously. Among his celebrated works of theology are ‘The Cost of Discipleship’ and ‘Ethics’. Credit- History.com Photos- public domain