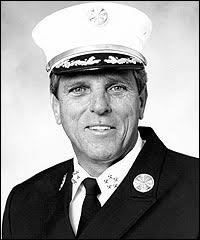 “I’M NOT LEAVING MY MEN”.
On September 11, 2001, Peter James Ganci Jr. had 33 years with the FDNY. He was the FDNY Chief of Department, the highest ranking uniformed fire officer in the department.
Immediately after the North Tower was hit at 8:46 A.M., Chief Ganci rushed from FDNY headquarters in Brooklyn, arrived at the World Trade Center in less than 10 minutes and set up a command post.
Chief Ganci and others were in the basement of the South Tower when it collapsed at 9:59 A.M., but they dug themselves out of the rubble that had caved in on them. Ganci ordered his men to set up a different command post in a safer location, further north of the buildings. However, Ganci himself returned to the buildings, coming to stand in front of 1 WTC where he was directing the rescue efforts.
Chief Ganci instructed Mayor Giuliani, the fire commissioners and others to clear the area because it was apparent the North Tower would fall. However, Ganci himself did not evacuate the area, saying, “I’m not leaving my men”, and remained at that location with William Feehan, first deputy commissioner of the FDNY. Chief Ganci and Deputy Commissioner Feehan were killed when the North Tower collapsed at 10:28A.M.