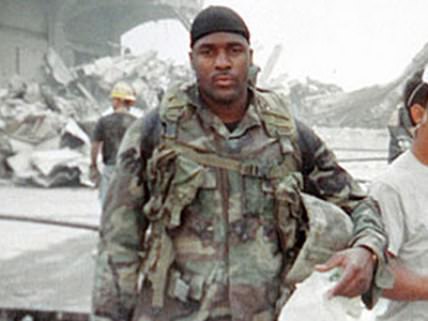 27-year-old Jason Thomas was dropping off his daughter to his mother in Long Island when he heard that planes had hit the twin towers. “Someone needed help. It didn’t matter who. I didn’t even have a plan. But I have all this training as a Marine, and all I could think was, ‘My city is in need,’”  he told an interviewer in 2006. So Thomas, a former Marine Corps sergeant, changed into the uniform he had in his trunk and headed to ground zero.

At ground zero, Thomas met fellow Marine Dave Karnes, who had also decided to change into his uniform and help any way he could. The two of them searched for survivors with the only tools they had: flashlights and a military entrenching tool. They climbed over  metal, concrete, and dust, calling out, “United States Marines! If you can hear us, yell or tap!” Searching the rubble of what had been the south tower, they thought they heard someone. They yelled down and heard a faint reply from two New York Port Authority police officers, asking them not to leave them. They were alive but seriously injured, trapped approximately 20 feet below the surface. Rescuers eventually freed the officers, and Thomas, exhausted, went home. He returned every day for the next 2 1/2 weeks to help, then walked away and tried to forget. “I didn’t want to relive what took place that day,” he said.

For years, authorities wondered about the identity of a U.S. Marine who appeared at the World Trade Center on Sept. 11, 2001, helped find a pair of police officers buried in the rubble, then vanished. But in 2006, Thomas saw a TV commercial for a new movie, Oliver Stone’s “World Trade Center.” He saw two Marines with flashlights hunting for survivors atop the smoldering ruins. “That’s us. That’s me!” he said to himself.

Thomas contacted the movie’s producer, and eventually was interviewed by several news outlets. He became more comfortable telling his story. “It’s been like therapy,” he said.