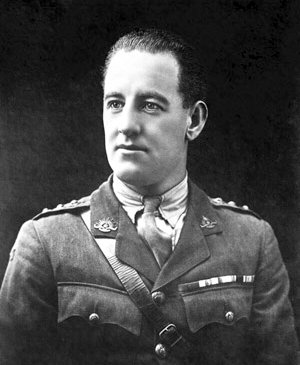 The battles fought by the Australian Imperial Force at Gallipoli are widely regarded as the defining story of the mettle of the Australian military. On April 25, 1915, Australian soldiers landed at what is now called Anzac Cove on the Gallipoli Peninsula. By that evening over 2,000 Australian troops had been killed or wounded.

Among those who fought against overwhelming odds was Lance-Corporal Albert Jacka. His division landed at Anzac Cove on the 26th in the Dardanelles, fighting against Turkish defenders on a narrow beach and in the steep ravines and hills above. New Zealanders and Australians held the position by digging a series of trenches. On 19 May 1915, the Turks launched an assault, capturing a section of the trench; one end of which was guarded by Jacka. For several minutes he fired warning shots into the trench wall until reinforcements arrived. When he attempted to enter the trench with three others; all but Jacka were either wounded or pinned. It was then decided that while a feint attack was made from the same end, Jacka would attack from the rear. The party then proceeded to engage the Turks with rifle fire, throwing in two bombs as Jacka skirted around to attack from the flank. He climbed out onto “no man’s land”, entering the trench via the parapet. In the resulting conflict, Jacka shot five Turkish soldiers and bayoneted two others, forcing the remainder to flee the trench; he then held the trench alone for the remainder of the night. Jacka became the first Australian in the war to be awarded the Victoria Cross for his bravery in the conflict.

Although the Gallipoli campaign was a military failure, it proved the bravery, ingenuity and endurance of the Australian forces and men like Jacka, who would go on to later victory against German forces in WWI.

Jacka’s division was sent to France, and the Western Front, in June 1916. Following a blast that killed two of his men, Jacka rallied the seven remaining men of his platoon to attack a large group of Germans who were holding over 40 Australian prisoners. In the fierce hand-to-hand combat that ensued, every member of Jacka’s platoon was injured. Jacka himself was wounded seven times, including two head wounds. But they prevailed against the Germans and liberated the prisoners. Jacka received the Military Cross for his actions.
After recovering sufficiently from his wounds, Jacka rejoined his unit, now as Captain, and led his men through the Battle for Messines Ridge. During their advance, the company overran several machine-gun posts and captured a German field gun. Jacka was again wounded and returned to the hospital for two months.

Returning to the front, Jacka led the 14th Battalion in an attack against German pill-boxes during the Battle of Polygon Wood. In May of 1918 he was badly gassed and shot through the neck. After two surgeries and a long recuperation, he retired to Melbourne and a hero’s welcome. He settled down and married, and eventually became mayor of the village of St. Kilda.

Jacka was an advocate for the unemployed, helping them to find work in public works projects. But his many wounds and gas exposure led to an early death; he passed away at 39. Over 6,000 people stood silently in respect to watch his funeral cortege. A commemorative service is held on the Sunday closest to the anniversary of his death, 17 January, in St. Kilda to honour him.