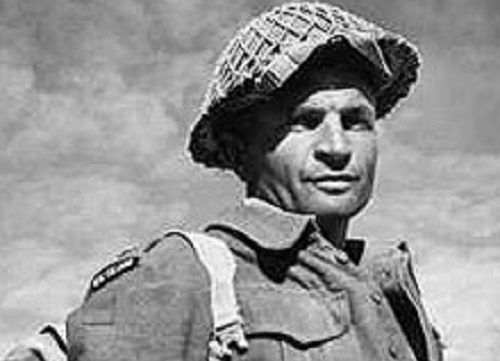 It takes a lot of guts to crawl up to an active machine gun nest and take it out. Second Lieutenant Charles Hazlitt Upham of the New Zealand Military Forces did it 3 times in one day.

During one week in May, 1941, Lieutenant Upham led his platoon against 3 different enemy positions, all well-defended. Upham was wounded several times and suffered from a bout of dysentery, but was not deterred. In one instance, as he set out alone through enemy territory to rescue a platoon at risk of being captured, he was shot. He fell to the ground, acting as though the shot had killed him. But he managed to crawl into position and, with the use of only one arm, propped his rifle in the fork of a tree and shot both Germans who were coming to finish him off. With only one hand to hold the rifle in position, fire, reload, then fire again, he shot them both. The second one fell directly in front of him, on the barrel of his rifle. Upham’s coolness and calculated bravery inspired his men to to prevail against an enemy that outnumbered them. For his actions that week he was awarded the Victoria Cross.

A year later, Upham, now a Captain, commanded a company in the First Battle of El Alamein. The Allies faced a powerful enemy that included Rommel’s Afrika Korps. Upham and his company prevailed in several actions; Upham single-handedly destroyed a German tank and several emplacements, even though his arm was broken by a machine gun bullet. But the company took heavy losses, and Upham himself was captured.

Upham was considered a “dangerous” POW by the Germans. He escaped several times, but was recaptured. He was eventually liberated from the infamous Colditz POW camp and sent home.

Returning to New Zealand, Upham was presented with £10,000 by his grateful community so that he could buy a farm. Upham instead donated the money to establish a scholarship fund for children of ex-servicemen.

Upham was awarded a second Victoria Cross in 1945. Feeling that such an award would be highly unusual, King George queried Upham’s commander, Major-General Howard Kippenberger: “Does he deserve it?” Kippenberger replied, “In my respectful opinion, sir, Upham won the VC several times over.”

Upham’s response to being awarded the VC was typical of many who receive such recognition: “It’s meant for the men,” he said.