Why is the world not here? 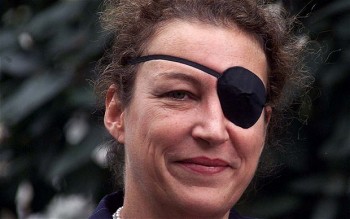 Marie Colvin had reported from war zones in East Timor, Libya, Kosovo, Chechnya, Iran, Iraq and Sri Lanka, and she knew that going into Syria would be risky. But she had to tell the story of what was happening there, despite the risks. “Bravery is not being afraid to be afraid,” she said. Still, she was unnerved by the loud singing by the Free Syrian Army commander who was escorting her and her photographer, Paul Conroy, through two miles of abandoned storm drain under the city of Homs, forbidden to journalists. They set up in a bombed-out apartment in the middle of the city, and from there visited a makeshift hospital, where the only doctor was a veterinarian. President Bashar al-Assad’s army rained a constant barrage of rocket and mortar fire over the city, leaving it without power, food, or medical supplies.

Colvin was appalled by war. Determined to reveal the horrors endured by ordinary people caught helplessly in the battlefield, she would report on drunken Russian soldiers shooting children for amusement in Chechnya, 340,000 Sri Lankan refugees at the mercy of Tamil Tigers, or 1,500 women and children trapped in a compound in East Timor. Her refusal to evacuate the compound as other journalists fled the attack by Indonesian-backed forces resulted in a standoff that brought attention to the plight of the women and children and their eventual rescue. “Why is the world not here,” she said to an assistant over satellite phone as saw the Syrian army bombard innocent civilians while the UN, NATO and the world stood silent.

Colvin suffered from PTSD. An Army medic told her that she had endured more trauma than any soldier he had ever treated. She wore a black eye patch as a result of a wound from shrapnel from a grenade fired by the Sri Lankan army. Escaping Chechnya she and a guide crossed a 12,000 foot mountain range in sub-zero temperatures, at one point plunging into an icy river. She spent 12 hours hunkered down in a field while Russian planes circled overhead, dropping bombs that whistled as they fell, like high-speed trains. In dispatches from Baghdad, she described the mass graves of dismembered Iraqis and the atrocities Saddam’s son Uday had committed on his own family. “I would like to have a saner life,” she once said, “I just don’t know how.”

Colvin’s extreme personality was beyond anything Hemingway could have imagined. Going into Syria she wore a double strand of pearls given to her by Yasser Arafat. Attempting to interview Muammar Gaddafi she spent much of a night resisting his advances. In an effort to get into a refugee camp in West Beirut, she and her photographer had to run 200 yards across a field that came under rocket fire. They agreed to hold each other’s hand so that if one was wounded, the other could pull them to safety. When she and two female Dutch journalists had stayed behind to help stranded refugees in East Timor, she replied to her editor in London, who asked where all the men had gone. “They just don’t make men like they used to.”

“I really don’t have a good feeling about this trip,” Colvin had said the night before she left for Syria. But she had to go, to find out what was going on. At six AM on their second morning in Homs, their building came under attack. They were jolted from their sleeping bags as three shells hit in rapid succession. The fourth shell blew open the front door, killing Colvin and seriously wounding her photographer. In January 2019, an American court ruled that the Syrian government was liable for Colvin’s death and ordered that they pay $300m in punitive damages. The judgement stated that Colvin was “specifically targeted because of her profession, for the purpose of silencing those reporting on the growing opposition movement in the country.