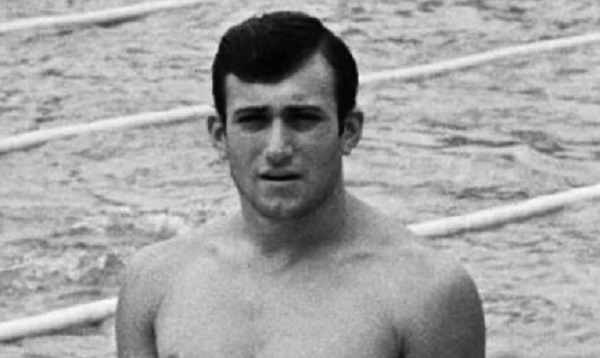 Shavarsh Karapetyan broke the world record for finswimming ten times in his career. Finswimming is a gruelling sport–competitors wearing a single, large fin on their feet compete by racing underwater, often for long distances. Fin swimmers’ training includes distance running, often wearing a sand-filled backpack. Karapetyan was one of the best, with incredible strength and endurance.

One September morning in 1976 Karapetyan was on a training run along a lake near his home in Yerevan, Armenia, wearing a 45-pound backpack. He heard a loud crash, and watched as a trolley bus careened down an embankment and into the lake. Over 30 people owe their lives to the fact that an Olympic fin swimmer just happened to be running by at the moment the bus on which they were riding plunged into 30 feet of water.

Karapetyan dove into the water and swam to the submerged trolley, finding nearly 100 passengers trapped inside. Seeing that all the windows and doors were sealed shut, he kicked out a window, severely lacerating his leg. He swam into the trolley and carried out, one by one, 37 passengers. 20 survived, and an additional 9 passengers escaped by themselves. Unfortunately, Karapetyan contracted a serious infection from the polluted water, permanently scarring his lungs. After months of recovery and training to get back into shape, he was able to compete and win one more time, but his olympic career was over. And he no longer enjoyed the water. “It wasn’t that I was scared of the water,” he said. “I just hated it.” He finally hung up his fins when he was 24. It would take 6 years for his heroism to be recognized. In 1982 Soviet authorities awarded him the Order of the Badge of Honor and he received over 60,000 fan letters.

Karapetyan’s next act of heroism involved fire instead of water. In 1985 he was one of the first to rush into a burning sports arena to help rescuers, burning himself in the process. “Anyone can find himself in a place where somebody needs help, and more than once, too,” he said. “The main thing is to remember what makes you human.”

“Our whole lives, we all owe everything to each other,” is something Karapetyan tells young people whom he coaches. According to him, there are plenty of examples of humanism to be found today, as long as one looks closely enough: “Kindness is nurtured by love. We have to teach our children to love each other from the very beginning,” he said.