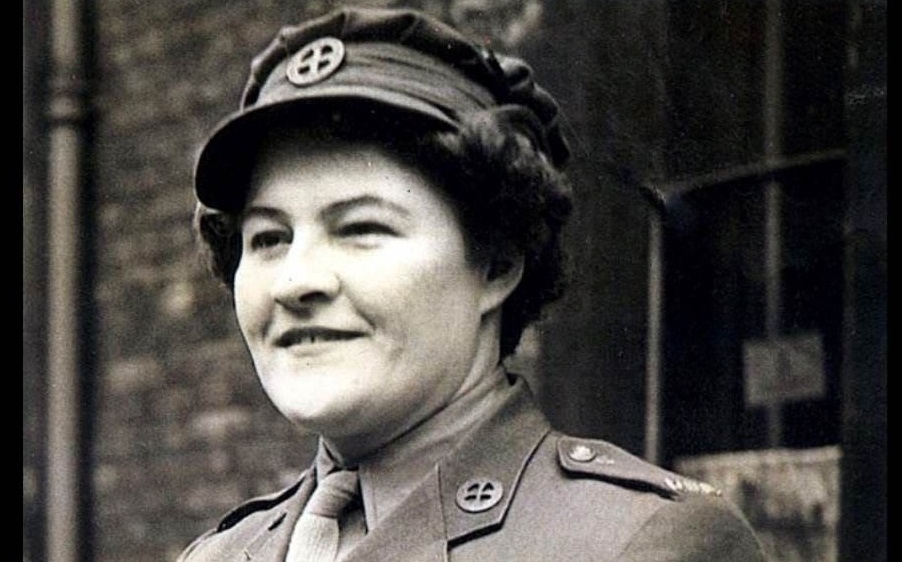 At the outbreak of World War II Joan Fletcher left her home in Regina, Saskatchewan to join the Saskatchewan Auxiliary Territorial Service. She had wanted to serve in the military, but there were no military branches for Canadian women at the time.

Wanting to be closer to the action, Fletcher headed to Britain at her own expense in 1941 to join the First Aid Nursing Yeomanry (FANY). The organization had started in 1907 as a first aid link between the field hospitals and the front lines, but by WWII FANY was involved in much more than nursing. In 1940 FANY was closely connected to the British Special Operations Executive (SOE) and included women operatives like Odette Hallowes, Violette Szabo, Noor Inayat Khan and Nancy Wake. Fletcher was stationed with other Canadian FANYs at Moncreiffe House in Scotland, where she drove cars and ambulances for the exiled Polish army.

As the war ended in Europe, Fletcher was assigned the task of evacuating Allied captives in Southeast Asia. She sailed on a hospital ship in a convoy from Calcutta to Singapore, through waters still dangerous with mines, eventually to Indonesia to evacuate the civilian internment camp at Bangkinang. She found approximately 2,000 emaciated prisoners, mostly women and children, in appalling conditions. To make matters worse, Allied troops had not yet arrived in the area, and Indonesian nationalists, seeing an opportunity to fill the power vacuum, had started attacking foreign nationals. So Fletcher turned to the only military available–The Japanese 25th Army.

Fletcher persuaded the Japanese army to provide her with an interpreter, 15 trucks, and an escort of 40 armed soldiers. The hazardous route from Bangkinang to the coast was 400 miles of jungle, rebels, and 4,500 foot mountain passes. The convoys could only transport a fraction of the internees at a time, requiring 21 trips, each taking over 20 hours. Fletcher accompanied each convoy, driving ahead to look for barricades, ambushes, sabotaged bridges and washouts. At one point her coat became caught in the wheels of a passing truck and she was run over. A Japanese physician bandaged her wound and she carried on with the evacuation. That won her the admiration of the Japanese soldiers, who now saluted her whenever she passed.

On the penultimate trip, rebels attacked the convoy and kidnapped two Dutch evacuees. Seeing one of the rebels attempting to steal a truck, Fletcher chased him down, ordered him out of the truck, and followed him into the jungle where they found the evacuees being held captive by a group of armed rebels. Fletcher reportedly shouted at them and, while they were taken aback, she grabbed a knife, cut the captives lose, and ushered them out the door.

When the evacuation was complete, the Japanese Captain of the transport company that had lent their vehicles presented Fletcher with a family heirloom – a 300-year-old sword.

Fletcher returned to Europe after the war, serving for nearly 3 years in the Information Section of the British Embassy in Warsaw. She had to leave abruptly in 1950. After burning her address book, she escaped on an RAF courier plane, only a few hours ahead of what she later described as a “Communist dragnet”. The exact details of her activities at that time are protected by the Official Secrets Act.

In 1946, Fletcher was named a Member of the Order of the British Empire (MBE) for her services in the Far East.

Fletcher’s sword and war medals are in the collection of the Canadian War Museum.