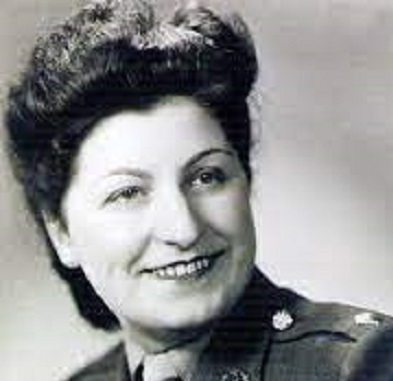 An American pilot parachutes from his burning plane, lands in a tree, and falls to the ground. His ankle is badly fractured, but he crawls to a nearby farm. He is lucky–the farmer is  sympathetic to the Allied airmen, and he takes the pilot to stay at the home of Clovis and Georgette Hanotte.  The family  hides him for weeks to avoid his capture by Germans who are searching for him. Their daughter,  23-year-old Monique Hanotte escorts the pilot between safe houses in France and Belgium until the end of the war.

Monique Hanotte was part of  the underground group known as the Comet Line–an organization of nearly 3,000 French and Belgian volunteers  dedicated to saving Allied airmen from capture, torture and likely execution by the Nazis. Monique was confident. She knew many of the border guards and would joke with them as she  crossed. She also knew the hidden paths through hedgerows where she could cross undetected. She was clever, usually bringing along an old loaf of stale bread in her bag. She recalled. “If we were checked, I would say, ‘I went to get bread from the country.’ It was easier to get through as a woman.”

The Comet Line rescued over 800 airmen; Hanotte herself rescued 135.  She and other volunteers well knew the risks they took in saving the airmen; seven hundred members were arrested by the Germans and 290 were executed or died in prison or concentration camps.

Monique Hanotte lived to be 101, passing away only a month ago. 70 years after rescuing the downed pilot, Lt. Charles V. Carlson of Minnesota, Hanotte would meet his daughter and extended family, who traveled to Belgium to thank her for the help she had given to Allied airmen.