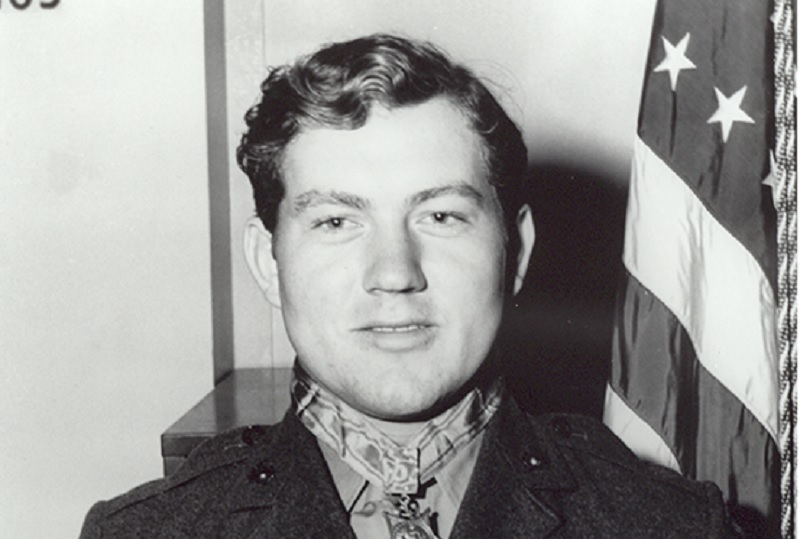 Less than a week after his 17th birthday, Marine PFC Jack Lucas and 1st Battalion, 26th Marines, 5th Marine Division land on Iwo Jima. The next day, two Japanese grenades fell into the trench he was sharing with three fellow Marines. He yelled “grenade!” and, pushing a fellow Marine out of the way, threw himself on one grenade and pulled the other one under his body. One of the grenades exploded, throwing Lucas into the air and perforating his body with over 200 bits of shrapnel,  including six pieces in his brain and two in his heart. Miraculously, Lucas survived. A corpsman treated his wounds, and Lucas was evacuated to a hospital ship. 26 operations were required to remove some but not all of the shrapnel from his body. Lucas became the youngest recipient since the Civil War to receive the Medal of Honor for his bravery.

Lucas joined the Marines when he was only 14, when he heard the news about Pearl Harbor. “That very day a cold chill ran down my spine, and I just became obsessed that I had to do something. I finally took matters into my own hands and forged my mother’s consent papers after I completed the eighth grade,” he recalled in an interview.

When the Marines discovered his true age, they reassigned Lucas to drive a truck. Undeterred, he snuck onto a Navy transport ship, USS Deuel, set for Iwo Jima, Japan. While on board, he turned himself in and volunteered to fight in order to not be cited as a deserter.  He was reassigned as a rifleman with Charlie Company.

“I don’t feel like I’m some big hero or anything like that. The real heroes are the ones who had to give their all. Their life.” -Jack Lucas