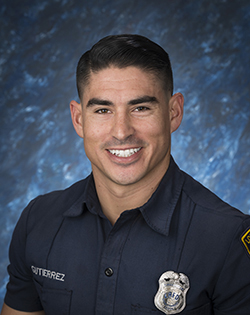 Task Force 33 of the Los Angeles Fire Department responds to a fire, finding a bungalow completely engulfed in flames. Neighbors shout that there are children trapped inside.

Looking for a way into the house, firefighter Bryce Gutierrez heard screams. He knew he had to act quickly. Searching for a way in to the house, he found doors and windows blocked by security bars. He finally found a rear-bedroom window – the only point of entry not yet consumed by flames – through which he could make access. Gutierrez  hoisted himself through the window into thick smoke and complete darkness. He heard muffled noises somewhere in the house, and began crawling through the rooms to find the children.  He found the first child, unconscious but alive, and carried him to the window to hand him to a fellow fireman.  He then returned, three more times, to rescue the remaining children.  The children, ages 2, 3, 5 & 7 were unconscious from smoke inhalation, but they survived, thanks to Bryce Gutierrez.

His exceptional service earned Gutierrez one of the LAFD’s highest honors, the Medal of Merit, but he doesn’t consider himself a hero. “My safety doesn’t matter at this point…No, I am just doing my job” Gutierrez said later.