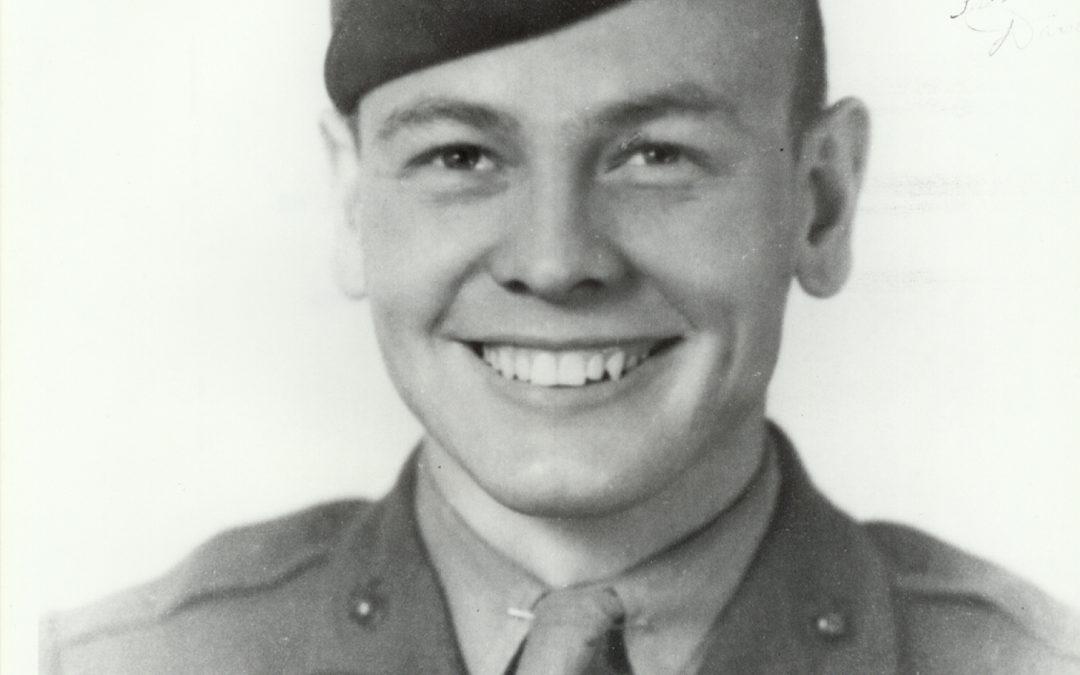 In his youth, Darrell Cole was a Sunday school leader, choir boy, and vagabond. He burned down his father’s barn when he was 3, ran away from home at 10, was vice president of his high school Dramatics Club, and joined the CCC when he was 17. Looking for some direction in life, he joined the Marines when he was 21. He wrote in his diary: “Becoming too fond of wine, women, and song made good money, but night clubs got most of it. Wasn’t getting anywhere, so enlisted.”

Among the many skills Cole had learned along the way was playing the French horn. So the Marines made him a bugler, with an MOS designation of “Field Music.” He was sent to the Field Music School, and following his training in the bugle was transferred to the 1st Marines, 1st Marine Division. In August 1942, Bugler Cole joined the 1st MARDIV in the Guadalcanal Campaign. He would soon find an opportunity to fight not with a bugle but with a machine gun.

Cole made amphibious landings at Guadalcanal, Kwajalein, Saipan, and Tinian. Surviving four battles was sufficient to convince the Marines to change his designation from Field Music to Machine Gunner, and to promote him to sergeant and send him to Iwo Jima. Cole and his Marines went ashore with the initial waves on February 19, 1945. They plowed through dunes of soft volcanic ash, sinking to their calves as they tried to move. The Japanese stayed quiet and did not fire.

Believing that it had caught the Japanese unprepared, or that the pre-invasion bombardment had suppressed them, the Navy rushed everything ashore to exploit this opportunity. Soon the beaches were packed with men and materiel. It was then that the Japanese opened fire upon them.

Cole led his men up the sloping beach toward their objective, Airfield No. 1. Under withering fire and flying shrapnel, Cole crept up to two emplacements and took them out with grenades. Further along, they came under fire from three Japanese pillboxes. Cole eliminated one before his weapon jammed, leaving him with only a pistol and one grenade. Cole’s Medal of Honor citation best describes what happened next.

“Shrewdly gauging the tactical situation and evolving a daring plan of counterattack, Sergeant Cole, armed solely with a pistol and one grenade, coolly advanced alone to the hostile pillboxes. Hurling his one grenade at the enemy in sudden, swift attack, he quickly withdrew, returned to his own lines for additional grenades and again advanced, attacked, and withdrew.

With enemy guns still active, he ran the gauntlet of slashing fire a third time to complete the total destruction of the Japanese strong point and the annihilation of the defending garrison in this final assault.”

It would be Cole’s final action. He was killed by a Japanese grenade as he was returning to his squad for more ammo, but his actions “had eliminated a formidable Japanese position, thereby enabling his company to storm the remaining fortifications, continue the advance, and seize the objective,” according to his MOH citation.

Sergeant Cole kept a diary during much of his time in battle. Writing in his diary, Cole said, “One day I had a 500 lb. bomb hit in the back of my fox hole, and two anti personnel bombs in front about 65 feet away. It caved the dirt in on my legs and arms. I got out OK. Picked up a chunk of shrapnel big as my head out of the hole with me… I didn’t believe there is a man who can tell 1/10 of what happened down there. Something was happening every minute. And no one will ever know the thoughts, ideas that a man gets in a hell like Guadalcanal was.”

In 1996, the Navy christened an Arleigh Burke-class guided missile destroyer the USS Cole in honor of his service. The vessel was damaged in the terrorist attack of 2000 in Yemen, but was repaired and is in service to this day.