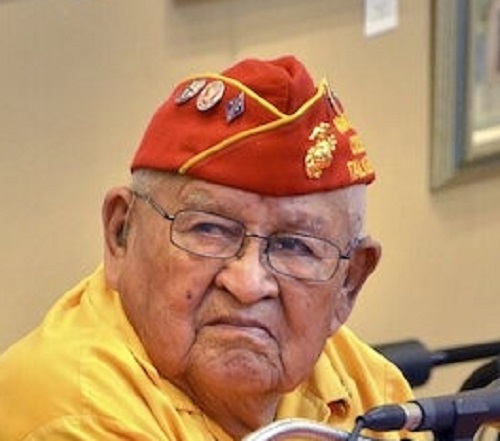 One of the last of the Navajo Code Talkers passed away in August. Samuel Sandoval was one of 29 Navajo men selected by the Marine Corps in 1942 to create a code based on their language, at the time mostly unwritten.  Their clever technique used word substitution and word association. When a Navajo code talker received a message to be decrypted, he would relay the message to the Navajo code talker on the other end by translating the English words into pre-defined code words. For example, the word for the warship “cruiser” would be spoken as “LO-TSO-YAZZIE”. If the message was intercepted, however, even if the enemy had the knowledge of the Navajo language, “LO-TSO-YAZZIE” would only mean “small whale”. This two-level of complexity was the code-within-a-code system that made the code so difficult to break. While “cruiser” was coded as “small whale”, there were many words that were not specifically coded. In those cases, words were spelled out by the letters of the alphabet, which was also coded. To prevent the enemy from deciphering the code by the frequency of each letter, multiple versions of each letter were introduced to thwart decrypting efforts.

Ironically, Mr. Sandoval joined the Marines after attending a school  where he was discouraged from speaking Navajo. He and his fellow code talkers participated in every major Marine operation in the Pacific theater. “Were it not for the Navajos, the Marines would never have taken Iwo Jima,” said Maj. Howard Connor, the signal officer of the Navajos at Iwo Jima in 1945. Sandoval served five combat tours, including Guadalcanal, Bougainville, Guam, Peleliu and Okinawa, and was honorably discharged in 1946.

After the war, the code talkers were instructed not to reveal what they had done during the war; their project remained classified until 1968. Sandoval came home and enrolled in college to earn a certificate in substance abuse counseling. He worked as a counselor for many years until opening his own clinic, To-Tah Alcohol Counseling, in the 1970s.