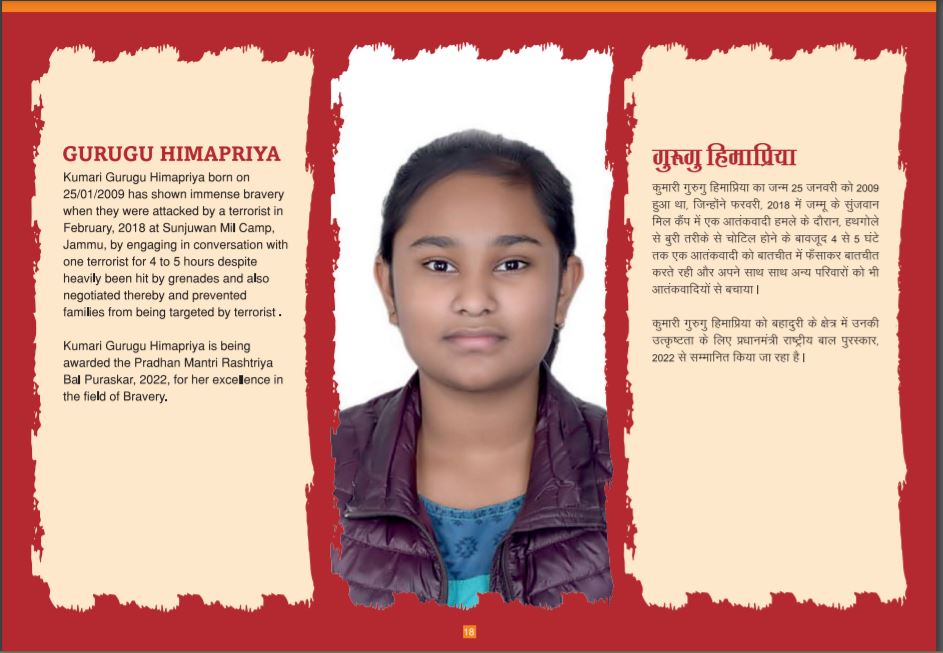 8-year-old Gurugu Himapriya was at home with her mother and two younger sisters when a terrorist broke into their house. Her brave actions would save her mother and sisters and lead to the terrorist’s capture.

Early one morning in 2018 three Jihadist terrorists attacked an Indian Army camp in Jammu, a contested territory between India and Pakistan. Known as the Sunjuwan attack, it was one of the deadliest in a series of attacks in the region.

When one of the terrorists broke into their home at the camp, Himapriya’s mother herded her three daughters into the bedroom and barricaded the door. For the next 3 hours they resisted, until a grenade exploded, badly injuring the mother.

Himapriya, also injured, continued the struggle. She eventually opened the door and talked with the terrorist for over an hour, eventually convincing him to let her take her injured and unconscious mother to a hospital. After reaching a safe distance, Himapriya alerted the army, which moved in to secure the area. The army later said Himapriya’s intervention not only helped in limiting casualties, but also in capturing the terrorists.

Awarding her a medal for bravery, Prime Minister Modi wrote “Gurugu Himapriya showed great presence of mind, which led to many lives being saved. I salute her bravery and congratulate her for winning the Rashtriya Bal Puraskar award. Her courage will keep motivating the youth of India.