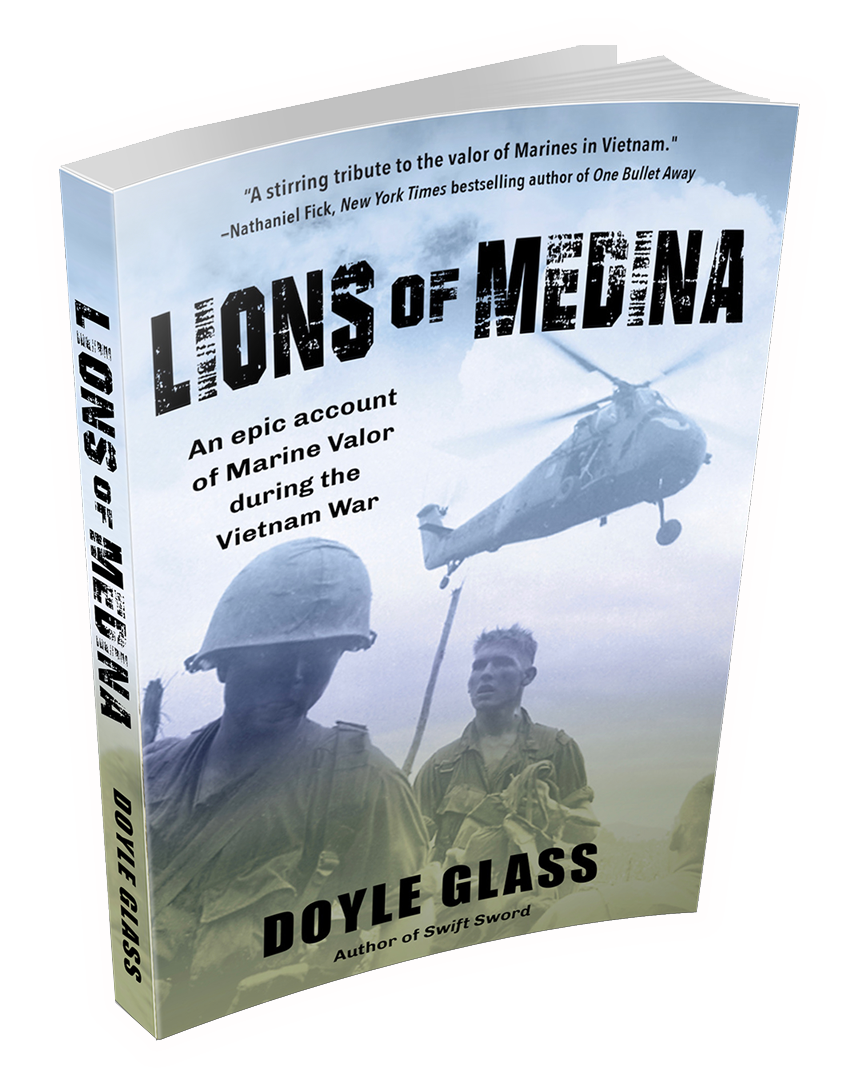 Join the list to be notified of new posts
and receive a free chapter from my book,
Lions of Medina.
Enter your email address and click SEND.
You are free to leave the mailings at any time.

“A stirring tribute to the valor of Marines in Vietnam.”

Cahill, a sharp and experienced point man, knew that taking the well-worn and ominous trail was a bad idea, but an order was an order and he led Charlie Company forward. It was a decision that would cost the 19-year-old his life. As he took a step to his left, toward a small knoll, Cahill walked right into the blast of a machine gun and the column of men he led suddenly faced decimating grenade and small- arms fire.

Rather than Charlie Company finding the enemy, the NVA, over two thousand men strong, had found Charlie Company. Surrounded, outnumbered, out-gunned, and quickly running out of ammunition, the Marines now faced annihilation and hell on earth under the jungle canopy.

Would the men of Charlie Company survive? How could they hope to beat back a vastly superior enemy force set on their complete destruction? Who would ever live to tell the tale of the “Lions of Medina”?

When radioman Mark Anderson finally received his orders for Vietnam in late spring of 1967, he had been in the Corps a year. The extra preparation gave him an advantage. “I think that the guys who went straight to Vietnam from boot camp had a harder time mentally. I got to learn about the Marine Corps for a year. I learned the ins and outs, how to play the games, how to deal with the lifers and the officers. It certainly let me know the culture I was in. It’s radically different from the civilian world. The guys from boot camp didn’t get to learn this. They went right to the fire.”

At Okinawa, Anderson saw for the first time Marines returning from duty in Vietnam. The sight left an indelible impression. “They looked like they were 65 years old, but they were 20. You’re 19 and you look like a bunny rabbit. You’re a little cherry boy, brighteyed and bushy-tailed.”
“When I saw those guys, I was sure that I was going to die,” he says. He had already been warned that radio operators were “marked men” with a life expectancy of two weeks. He decided to accept the fact that he was marked for death. “I decided to accept it, go and do the best I could, and if I got blown away, I got blown away.”

Praise for Lions of Medina

“Captures the chaos and ferocity of infantry combat, and shows that little has changed from the pass at Thermopylae, to the jungles of Vietnam and the streets of Iraq.”—Nathaniel Fick, New York Times bestselling author of One Bullet Away

“In this moving story of Americans in combat, Doyle Glass takes us deep into the harrowing experiences of one Marine unit in one of the Vietnam War’s most bitter battles. What Stephen Ambrose did for Easy Company, 506th Parachute Infantry in Band of Brothers, Glass does for Charlie Company, 1st Marines in this excellent, powerful book.”—John C. McManus, author of Alamo in the Ardennes and The Deadly Brotherhood

“The author of this gripping account of Vietnam infantry combat set out to redeem the reputation of the American fighting man in a very controversial conflict…Glass finally gives credit where it is most due, to the grunts who, like their fellows in other wars, bore the lion’s share of the burden in Vietnam.”—Booklist

“In a plain, straightforward style unembellished with jingoism or theatrics, Glass intricately weaves all the horrific action of that week that I spent one night with Charlie Co into a fine and inspiring chronicle to record many individual acts of now-sung heroism…As I critically read Lions of Medina, I found myself actually gasping for breath, for I kept holding mine as the action unfolded before me all over again, nearly 40 years later…Fortunately, Charlie Co and I never have to redo Operation Medina. Doyle Glass has done it for us in his unmitigated, indelible style.”—Bruce Martin, Operation Medina veteran